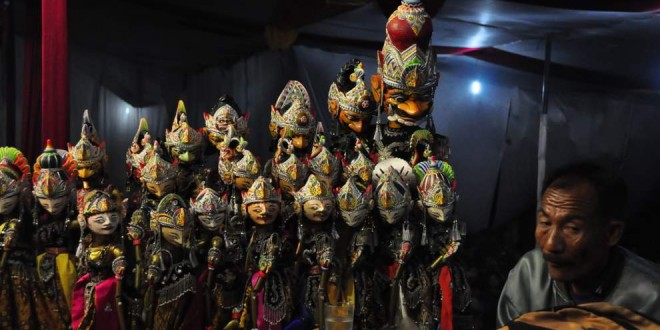 A slender figure, delicate facial features, long and shapely arms. She can move with the grace of a princess. She is sometimes whimsical, can be the embodiment of good or be evil like the devil. She is an easy victim of manipulation. That mysterious person is wayang golek.

The main actress of the Javanese puppet theater, wayang golek – a wooden puppet – is the basic element of the old and rich tradition. Her unusual virtues were admired and described already in the 10th century; I learned about her existence during my studies at the Theater Academy in Białystok in Poland.

Wayang golek has a younger Polish sister known as “jawajka” (a Javanese puppet). The puppet is operated from below, one hand animates the body and the head, and the other hand moves the arms supported by stiff rods. Plays staged with the use of jawajkas are becoming very rare in Poland.

The study of the nature and secrets of animating a jawajka frequently gave me headaches and there was many a time when I looked at it with disgust, boredom, and great aversion. The study of particular gestures and movements is tedious work, hours on end spent behind the screen, sweat, and incessant pain of the hand and the arms. All that to create an illusion that the piece of wood and cloth is a living creature. Our authority on the topic was professor Jan Plewako – a very experienced actor. When he took the puppet in his hand it immediately came alive and we watched it not like students who want to learn something but like children enchanted with the magic of the puppet theater. Mr Plewako was our true jawajka master. I did not even dream at that time that one day I would have the opportunity to see a wayang golek master on Java.

The moment we arrived on the Javanese coast it became obvious to me that I had to find the puppets. The task seemed easy because the Javanese are proud of their theater traditions and wayangs are said to be everywhere, especially in the middle area of the island.

I directed my first steps in Jakarta to the famous puppet museum where I got disillusioned for the first time. The collection was admittedly impressive but it seemed a bit antiquated and there was not much specific information. The explanations offered by the museum employee, who was more interested in promoting the souvenir shop, did not really encourage one to come and see the play which was on there every Sunday morning (the entry was free). Still, I did not give up because, after all, wayangs were supposed to be “everywhere”…

In the town of Bogor I found the address of an artist who was said to be sculpting some of the most beautiful puppets on Java. It was not easy to find his house but, with the help of local people, I finally managed to get to his workshop. I expected a magical place but only saw an ordinary souvenir shop for tourists. Wayangs were hanging in a few rows, they were pretty, indeed, perfectly sculpted but not differing from one another. Their blunt, dead eyes did not see – puppet no. 1, puppet no. 2, no. 3, 4… They looked like mass-produced Chinese souvenirs. They were pretty but not what I was looking for. I did not want to waste my time there and I went to Bandung – the heart of the Javanese puppet industry.

In Bandung it was the same story, an artist’s workshop and lifeless pieces of wood in the form of wayang golek as souvenirs from the stay on Java. There were also plays but made with a standard tourist in mind. For a small fee one could even participate in an animation workshop. Where were the true theater puppets and their masters? Had the tradition of wayang golek disappeared or turned into a mere commercial endeavor?

Nothing of the kind! The true wayang golek still exist and in a great shape too! One only has to know where to look for them and whom to ask about them. Edvin, our CouchSurfing host, was very moved by my desperate searches and decided to help me. He asked his uncle, who had hosted us at his home in the country, about the puppets, the uncle asked the aunt, the aunt called her friend, and guess what? On Saturday evening a true dalang – a wayang golek master – was coming to a neighboring village. But wait? A master coming to a village?! But yes, off course!

The plays are usually staged during holidays, birthdays, weddings, important anniversaries, or other social occasions. In the neighboring village a ceremony of circumcision was being prepared and, on that occasion, the boy’s parents invited a wayang golek master to come. “Invited” is a very circumspect way to put it because a play like that costs quite a lot of money (about 3 to 4 thousand dollars) and only wealthy families can afford it. However, every inhabitant of the village and the neighborhood can come and watch the play.

We were in the neighborhood and were also going there. We reached the place about midnight when the play had been on for good two hours; it would end at about two or three in the morning. It all depends on the master’s inventiveness and the hosts’ wallet.

The huge and tall stage was built in front of the house and the audience was sitting on mats laid in the wide yard. There were about five hundred people: the old and the young, children, women, men, the rich and the poor. All the inhabitants of the vicinity must have come, regardless of their age, sex, or social status. Everyone was invited and welcome. The viewers were sitting, lying, squatting, or standing but they were all engaged by the show which lasted a few hours. Hunger and thirst did not plague them as sellers of refreshments were circling around the place. Everyone was so engaged by the action that, exceptionally, no-one noticed the arrival of two whites, that is, us.

As “foreign guests” we were offered honorary seats on the terrace of the house but it would have been so nice to get closer to the stage… the host must have been reading in my mind because a moment later we were sitting in the middle of the stage, among the artists. Two meters in front of us the master of wayang golek – dalang – was presenting his puppet-and- storytelling artistry. The acts of the play were mainly based on educational stories from the Sanskrit epic poem “Ramayana”. However, many elements were created on the spot and were the creations of the master’s rich imagination and improvisation skills. In a witty and frequently sarcastic manner the master commented on current events, for example, political ones.

Cepot came to the stage – Cepot is a character peculiar to that region of Java. He is a sort of a
crafty clown. We do not know Indonesian so we could not understand what Cepot was saying but the audience repeatedly burst out in laughter and answered the questions asked by the puppet. A very lively dialog developed between the public and the puppet, and the experienced dalang unfailingly provoked the viewers to react and engage in the action. After all, he was a master. A moment later we were watching a beautiful lyrical scene in which the puppet was moving in an amazingly delicate manner, almost dancing. It seemed light as a feather and it was only a piece of wood… That time, the audience, enchanted with the beauty and the harmony of the scene, seemed to freeze in admiration of the master’s animation skills.

Dalang is a soloist, he animates the puppets, gives them voice, creates stories, and improvises on his own, but behind his back on the stage there is a whole orchestra of gamelans, three

beautifully dressed singers, and musicians playing string instruments the names of which I do knot know. They filled the pauses between the parts of the play with music. In the middle of all that there were we, and tens of pairs of true Javanese wayang golek were watching us, as if asking the question “What are you doing here?”

That was the place I had been looking for. Those puppets were not mere sculpted figurines, they were actors, they acted in a play, had their story and, although motionless, appeared to be living. The magic of theater; it sent shivers down my spine.

Each wayng golek has a specific character and personality which is expressed not only in the manner of speaking and moving but also in its looks. Puppets which have the roles of protagonists are slender, have slightly pointed noses and slightly slanted eyes which are always looking down. They speak in a mild manner, move with grace, and in battle tend to use the powers of the mind rather than physical strength. Antagonists, on the other hand, have bulging eyes, are coarse, speak with an unpleasant, harsh voice, move in a violent and awkward manner.

On the stage we met one more interesting person – Anna, a student from Hungary who had come here on a grant. Beguiled by the magic of theater, she became on of the gamelan musisians in the orchestra. Anna explains many symbolical meanings of the details of the play to us. She also told us about the lives of the artists in that group. They all lived together in one village and had a really tight schedule for the next week – they were staging a play every day. We also learned that the puppet theater was invited not only for special occasions and holidays but also when a conflict broke out in a village or a small town. Informed about the source of the conflict, dalang acted out improvised scenes, unobtrusively smuggling a proper message in them, suggesting a solution to the problem.

I believe that is the secret of the success of wayang golek. It is not only an artistic, cultural event for connoisseurs but a kind of entertainment with philosophical and religious underpinnings, with tips offered in a comprehensible form to all sorts of viewers. Because of that the puppet theater is still alive, doing well, and even evolving and developing. The wayag golek plays do not have to be advertized on Java as they are attended by crowds of spectators. Dalang master are respected people. A veritable puppeteer’s paradise…