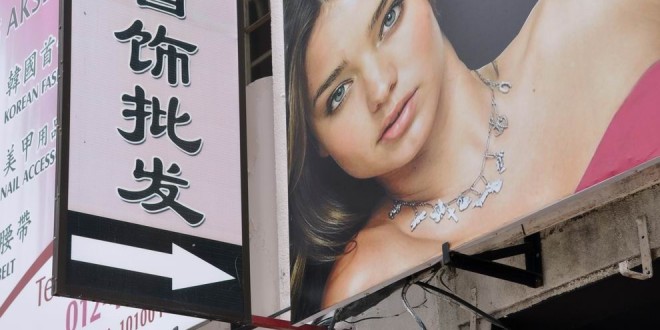 Malaysia is another country none of us has ever visited before. Naturally, we were very curious about it, and we heard interesting opinions – economically developed, pretty landscapes, tea plantations, and a cultural mix. We have spent three days in the country and can report live.

There is also interesting architecture – different parts of the city belong to the Chinese, Malays, or Indians and the simple conclusion is… if we wish to have noodles or pasta for breakfast, we go to China Town, for dinner we will have the Malaysian soup Laksa assam (fish soup served with white noodles), and for supper we will have Chicken Tikka Massala in an Indian eatery.

Heaven on earth for people who love culinary adventures on the road. While in Thailand I missed the Indian cuisine which is so-so there, in Malaysia I am fully satisfied with the offer. There is only one problem – beer. It is horribly expensive, about PLN 7-9 per bottle. It is true those are first-day prices from a tourist resort and maybe I can find something cheaper but, for the time being, I am threatened with abstinence for the nearest month.

At this point we are coming to an interesting issue. Malaysia seems to be a very tolerant country because, even though its inhabitants are nearly 60% Muslims and Islam is the official religion, you can still drink beer here. This is not Pakistan, less still Iran, where one could forget the gold drink. Although, actually, one could buy beer in the Pakistani mountains – smuggled from China ;)

My very pleasant first day in Malaysia was spoiled by some crafty fellow in a mosque who scolded me for taking photographs of him praying which was not true as I was taking photographs of the interior of the mosque and not of him. I brushed him off because he wanted to check my camera but I was not so stupid as to give him that opportunity even though there was not so much as half his foot on the photos. It was clear looking for a pretext because a moment later he poured his grudge on a woman, I think British, who obediently let him examine the film and when he found himself on the photographs he demanded USD 20 per picture. So I walked off fast to avoid possible future harassment.

The next day we drove around the island and found two temples to be the most interesting objects there. The first one was a floating mosque. I have never seen anything like it before. The second one was the Snake Temple. When I was visiting it I was wondering why I had come there in the first place and suddenly, on the wall of the temple, I noticed two green snakes, hardly visible at first sight. Luckily I did not stick my nose in there because it may have ended badly. Later we found a few more snakes but those were behind the wall so they could not bite us; they were said to be poisonous. Even so, I will remember the temple for a long time.

During the evening walk around the city I was observing the inhabitants carefully. In the Indian part there are plenty of CDs and Bollywood music. It is also heard at every step, off course, apart from being sold at stalls all over the place. I can also see a lot of shops with colorful fabrics. One only has to enter, have the measurements taken, and in a few moments a true Indian sari is ready. Add to that the characteristic smell. I cannot describe it but it smelled the same as on the streets of Accra or Varanasi.

The difference is I cannot move from Accra to China in 2 minutes, whereas I can reach China in such a short time in Malaysia. I fell like having some noodles – and there they are. Perhaps chicken feet. No problem – there are the chicken feet. On the corner of a street I can see a stall with the „kindling”. The „kindling” is the name I give to pieces of paper with prayers written on them which are bought by the Chinese who then go to a temple to burn them. It is a form of prayer. That view is clashing with the Bombay music which I can still hear from afar.

I observe the Chinese here with interest, as they behavior differs from that of their relatives from the People’s Republic of China. They are more polite, they smile sometimes and strike a conversation in English. It is so weird for the Chinese! However, it is late afternoon and I can hear a characteristic sound. A muezzin. He starts to sing and I can still smell the burning „kindling” and the Buddhist incense sticks. Again I jump from a country to another country, from a religion to another religion. I decide not to enter the mosque this time because I have the telephoto lens on and I prefer not to provoke another awkward situation.

I continue walking around and take photos of the Chinese tenement houses, the Indian shops with sari, and again of a Chinese eatery, and along the street three women are strolling with heads covered with scarves.

I really like Malaysia. Some people have warned us it would be boring but it is not boring for me. I have a feeling that I will enjoy being here.