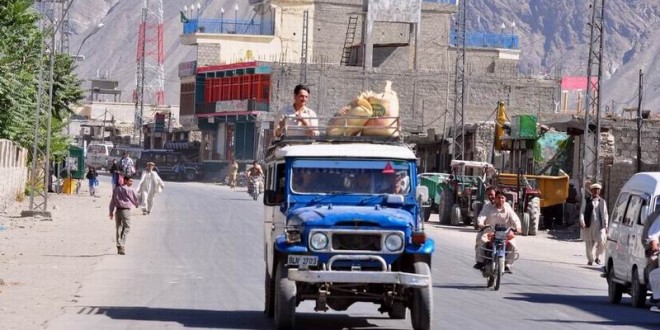 We finally managed to get out of Gilgit and went to Skardu. I have to admit I we were not too keen on going there after I had come to terms with the information that we could not trek at the foot of K2 with our budget, but to be in Pakistan and not to see K2 at least from a distance… It would not be right.

In the morning we got on the minibus from Gilgit to Skardu – a mere 7,5 h to go! Those mountain roads! We arrived in Skardu in late afternoon and really only had time to find a place to sleep and have a snack. Next morning we set off to get to know the vicinity, starting from… a motorcycle workshop. I entered on a whim, to ask if we could rent a motorcycle. “That can’t be done. If you get into an accident, we will be in trouble. Besides, we don’t have motorcycles!” was what we heard. And there were about 10 motorscycles in the workshop, if not more. I was counting them in my thoughts and looking around at the Pakistanis there – their unrelenting faces said: “Forget it, man – take a taxi.”

Suddenly Pasha, a client of the workshop, spoke out. “Where do you want to go?” he asked. I told him about our plans, etc., and he answered readily: “OK, I will lend you my motorcycle for tomorrow. No problem. Give me your phone number!” I was dumbfounded. He would lend me his motorcycle, just like that? For free? Yes, for free, although when the guys from the workshop realized what was going on they tried to talk Pasha into charging us. He did not want to. And thus we “rented” Pasha’s motorcycle for the whole day, for free! :)

We roamed about the town… a bazaar, a bazaar, the omnipresent goats, dust, (I got used to it after a month in Pakistan) and, suddenly, we came across a very special place, for Skardu standards. Walking along the streets of that provincial town we saw the Noorbakhashi Jamia mosque which is a replica of the saint mosque of Shiites from Karbala in Iraq. I had heard something about it before but I had completely forgotten it was in Skardu. At the mosque, much to Alice’s disapproval, I had a small religious chat with one of the most active locals there. Well… after about 20 minutes of weak arguing for the greatness of Shia Islam he ran out of arguments. He was doomed when he said that Bin Laden and Saddam Hussein were Sunnite, wherefore all Sunnis were bad guys. Well… We will return to that soon.

In the afternoon sun we climbed the rock where the fort was to be… and probably had been… at some time in the past. It was worth climbing Karpocho, though, for the mere view… below we saw Skardu and the River Indus, still clear (relatively near to its source). Walking on, we got to a polo field where a match was under way.I have never been fascinated with that game but I will honestly admit that when I saw it live, for the first time in my life, I was nicely surprised.

We went on and suddenly we spotted a sign saying: PIZZA! “Alice, come, we’re going for a pizza!” I said, full of excitement. In answer I heard: “Andrzej, a pizza here?!” To which I answered: “Yes, yes, I know… but it could be funny!” And so we went! Let my commentary be brief – I cannot say what the taste of that pizza was but it certainly was the most piquant one we had ever eaten, and that is why I was completely unable to discern the taste! We were burnt through! At the beginning we ordered a small Cola to go with it but later proceeded to a big king size bottle and that still was not enough to put out the fire. “Well, we expected it to be funny – and it was”.

Late in the afternoon, as we were returning to our temporary accomodation, we met some Spaniards from Fairy Meadow. As it turned out the sponsor of the guys was so happy with their results (they broke the world record in motor gliding in the category of up to 7,800 m above the sea level) that he had let them stay in Pakistan a week longer. We chatted a little and made an appointment for dinner for the next day. It was an honor to us! :)

And so we waited, burnt through by the Pakistani pizza, for the next day which was a great unknown for us. Just before going to bed we got an SMS from Pasha: “Hey, so what time do you want that motorcycle?” At that moment we understood that Pakistani hospitality and disinterestedness could be strong competition for Kurdish and Iranian hospitality which we had experienced before.

Somehow, the motorcycles we rented in Pakistan were all motocross motorcycles, which we did not mind considering the condition of Pakistani roads, and the mountains everywhere. Still, we were always an object of interest when we drove them. It was no different that time. Pasha’s motorcycle was a beautiful yellow motocross vehicle, however, as it turned out later, its front springs were not in good shape… it was funny again, although Alice begged to differ ;)

Instructed by Pasha as to the where and how of driving around we set off. Before that, though, Pasha had gone to the gas station, refueled the motorcycle, and said with a smile: “You have a full tank. Just in case, so that you don’t run out of gas on the way.” It must be clear by now that he did not want a refund. He was almost offended when I suggested it.

We went and went and went and went… dust, ruts, trucks filled with earth – “What the hell is going on?” I was asking myself. A moment later we realized that a dam was being built over the Satpara lake which was our destination. It did not spoil our trip, though, at least as concerned me. There was the motocross, beautiful mountains, a road full of potholes, and a woman – what more can you wish? A dinner, perhaps? There was a dinner as well, or rather, a picnic over the lake with the food we had brought with us. The Pakistanis watched us, surprised, as we took out a portable cooker, made a salad, prepared the chicken, boiled potatoes, and finally dressed them with butter. A heavenly meal in the fresh air!

Boys and their toys

The Satpara lake is very beautifully situated and we stopped by a small harbor where one could rent a boat and swim on the lake. We had not planned it at all but when we were borrowing a knife from the host I asked him if he did not know anyone with a jeep who could pick us up next day to the starting point for our trek. He did – so we exchanged the numbers, agreed on the price, and started looking forward to the trekking to Burji La where, supposedly, one could take a view of K2.

We drove a little more on Pasha’s motorcycle and then I took Alice to the hotel and went to Pasha’s to return the vehicle. I did not expect it to take long but you cannot always predict Pakistani hospitality and in a few moments I was in Pasha’s room, treated to delicious juice and a salad. It took me over an hour while Alice was waiting for me because we were to go to dinner with the motor gliding Spaniards and had to do some shopping. In the end, after I had got to know Pasha’s whole family, he took me back to the hotel and I went shopping with Alice, and later we went to the dinner.

We had a loose appointment with the Spaniards. We were to come to their hotel about 19:00 PM but it took us a bit longer. So, we arrived late and, asking for them at the reception desk, heard they had already gone out. We were greatly relieved! They must have gone without us! We thought that we had got disentangled from a troublesome situation because on our way to the hotel we had realized we only had about 5 dollars together for the scheduled dinner. We started to look for some money which may have got stuck somewhere in our pockets but there was nothing so the absence of the Spaniards was very convenient. We would not look poor.

We were just backing away from the hotel when in the entry we met the mirthful Spaniards who were coming back. It turned out that southern blood and being late are not myths so a moment later, with trembling hearts and without money, we went to dinner. We only wondered if it would be a super restaurant or a bar in which we could buy something for USD 2 per person (because such it was not hard to find such bars in Pakistan either). We ordered the cheapest dishes without beverages and calmed down a bit. Relaxed, we started to ask the our companions about the details of breaking the world record – where, when, who, etc. It was a very nice evening and the Spaniards and one Belgian guy, as it turned out later, were not stuck up professionals at all but very cool and friendly professionals. Great people! We exchanged addresses and at the end the main sponsor paid the whole bill for all of us.

Off course, next morning our jeep was late. Before our departure everybody asked if we did not need a guide as there were no road signs on the way, there was the altitude sickness, there were the bears… Damn it, we did not want any guide! We arrived at the place from which our trekking was to start and stopped for tea at a local innkeeper’s. He had returned from the town yesterday and had not yet cleaned up all the mess the bear had left when it had broken into his kitchen. The imprints of the great paws were quite visible on the floor, the damaged wall and the chaos around the premises were a powerful testimony of the visitor’s identity. Um…

We paid for the tea and we paid the driver for picking us up, and his parting words were: “So, good luck! Now it is only you, the mountains, and the bears. Have fun!” A bit numb after all that we went trekking and… no… you will learn the rest from the next episode! :)