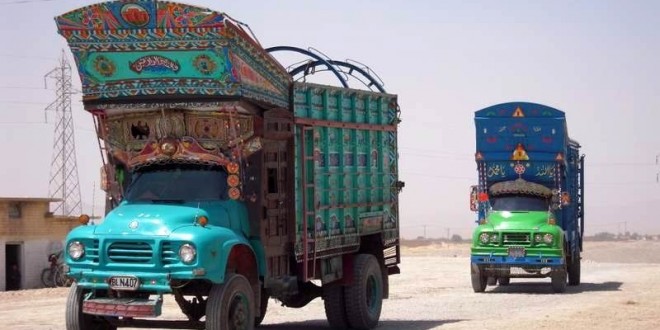 For the first time in our entire journey the whole entry will be devoted to cars. The particular type we will look at are trucks. Some readers can be surprised with that choice because when one travels around the world one meets all sorts of weird vehicles bu  Pakistani trucks are incomparable on a world scale and merit a special feature post.

Pakistan had attracted me for a long time for one reason – the Karakoram mountains. I had dreamed about them, planned to see them, watched photos and slides. However, having watched Kasia Gembalik’s presentation at Festiwal Podróżników „Trzy Żywioły” (Three Elements Travellers Festival) in Cracow I got mad about Pakistani trucks.

What Kasia and Mikołaj had done (they had bought a truck in Pakistan and drove it to Poland) was absolutely incredible and they deserve admiration for their determination, enthusiasm, and passion. As a side effect, they provoked me to make the final decision. During our journey we just had to enter Pakistan. Although untoward events accompanied the decision from the very beginning, we did manage to complete that goal. We saw those motorized otherworldly wonders with our own eyes.

I first got to touch one just after we had crossed the border with Iran, in Taftan. I was speechless. I was gaping at those enormous vehicles as they were driving along with dignity, accompanied by the characteristic sound of hundreds of little bells. A few days later, in Quetta, at our host’s customs office, I had a further opportunity to observe them. I was sitting and watching as if hypnotized. That must have been an instance of what is called infatuation.

After a few days, as I was becoming a bit accustomed to them, I started to observe more closely and pay attention to details such as decorative elements, etc. All that, however, was external only. As we were returning from the Fairy Meadows I suddenly had an idea – we would hitch a ride on such a truck. Without further ado, in spite of opposition from barkers and local people, we stopped such a track with a Peshawar registration number and got onto it. Dreams do come true, my dear readers! One only needs a strong belief like mine – sitting in the Nowa Huta Cultural Center in Cracow and watching Kasia and Michał’s film I imagined myself in such a truck and the dream materialized! :) The visualization came alive, one could say…

A Pakistani truck with us inside – photo

Already before the car pulled out we had been amazed by the number of decorative objects in the cabin – garlands, little bells, tassels, paper flowers, and so on. But it was only when the driver started his „love” and got it moving that the full impact of the magic was felt. The mobile elements of the decoration started to make all sorts of sounds. Even though the truck was very slow due to the rather unimpressive quality of the surface of the Karakoram Highway, I enjoyed every minute of the ride.

As days went on, I started to investigate – why were such trucks only to be met in Pakistan, how the hell had they come to look like that? I asked drivers, the elderly, young Pakistanis – I got no answers. Usually all they said was: “It’s traditional.” But I wanted to know where the tradition had come from. Finally I picked up the trail and understood. Do you know what the life of a real truck driver looks like? He is on the road 28 days in the month and only spends 2 days at home.

Frequently, the truck is the only home for those people. As time goes by, the truck virtually fills their lives. In Pakistan it is not different than in other parts of the world. With the current state of KKH a loaded truck gets from Karachi to Sust in about 18 days. That is just for one direction, and if we count the other one? It takes over a month! It is no wonder that Pakistanis treat their trucks like a love of their life, that is, like a woman. They transfer their feelings to the car, decorate it, watch over it, and rarely allow other drivers to get behind the wheel because that would be almost like giving one’s woman over to another man – it is not fitting for a driver to do that! Suddenly, everything became clear for me. Everything, but…

All of a sudden, a new theory came to light. An older Pakistani said that the bells were meant to scare nightly ghosts away. The theory would be perfect for a good story were it not for the critical view Muslims take of such superstitions.

Anyway, for over two months of our stay in Pakistan I did not see two trucks which would look alike – and there is a reason for it. Each truck is decorated in a special workshop at the truck owner’s individual order. It is the owner that chooses the type and number of bells and tassels, the material for the roofing and the front bumper, and the shape of the two latter elements (sometimes also the type of the luggage compartment in older models). Another issue is carving decorations, painting, sometimes even calligraphy and sculpting in the front and back parts of a truck. The prices for such services range between USD 1,000 and 8,000. Would you believe  it? And that is not the end of the story!

Just as architecture has its different styles, e.g. regional varieties of Gothic, so truck decorations in Pakistan differ according to the region. Thus:

I was especially attracted to older trucks stylized like English Bedford TJ cars. However, the newer ones with square cabins,with proper decorations, are also quite impressive. A new wave of Pakistani trucks is coming. Time goes on, also in Pakistan.

Interestingly, Pakistani trucks have earned a special name. It was coined by American soldiers stationed in Afghanistan because, as the two countries have a close relationship, Pakistani trucks are frequent guests on Afghan roads. The name is Jingle Trucks because of the numerous bells which, attached to front bumper, the sides of the luggage compartment, and to the back, make a jingling sound all the time.

Jingle Trucks driving by the customs office near Quetta.

Such is the story of Pakistani trucks which leave no-one indifferent and which have become recognized as characteristic for Pakistan in the whole world. They can be found in the whole of Pakistan, in parts of Afghanistan, and in northwestern India. It is hard to find an undecorated truck unless in the vicinity of the Sust customs office where huge Chinese trucks wait for unloading – those are horrible, cold, and unmemorable. By the way, Pakistani truck drivers secretly compete for the title of the owner of the most beautiful… truck!

And now there is a quiz question for you: we already know that Jingle Trucks are characteristic for Pakistan and its border area, however, Pakistan is not the only place in the world where trucks are decorated in a fanciful fashion. Can anyone name another country where decorating trucks (off course, in a different manner than in Pakistan) is also popular and is considered to be art? One type is rather futuristic decoration – that is a tip for you, maybe you will be able to guess ;)

Śledź @loswiaheros
This error message is only visible to WordPress admins


Error: API requests are being delayed for this account. New posts will not be retrieved.