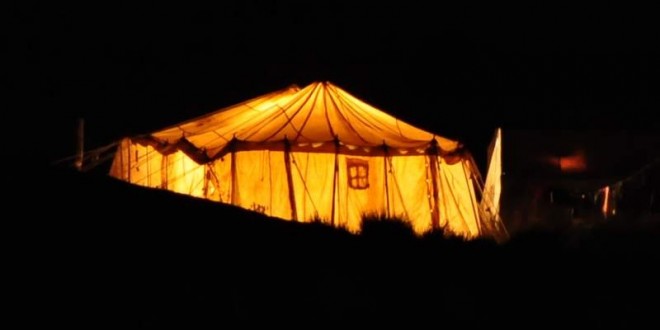 Inspired by the book „In Alibaba’s cave”, written by the Spanish author Anna Briongos, we decided to check what the life of nomads in Iranian mountains looks like. Almost the whole story in the book is set in Isfahan but one day the heroine travels to the country, to the Zagros mountains, to meet the true Iranian nomads – the Bakhtiari people. We decided to follow her footsteps.

The whole escapade was possible thanks to Habib to whom we had mentioned the Zagros mountains nomands while still in Poland. When we reached Isfahan, a surprise had been waiting for us – a trip for a few days to the nomads. The number of participants: 5, that is,Habib, his friend Hasan, Michał, and we.

It started inocuously. We got on a local bus in Isfahan, heading for a small town, and then for an even smaller town in which we spend a nice evening at Hasan’s friend’s place :)

Great dinner, traditional Iranian food on a Persian rug made by his mother. Would you believe that such a rug is made by hand and that it takes from 8 to 18 months, depending on the size? Sometimes such rugs are like paintings. Each dye used in the rug is obtained from natural sources. We also spent the night on the rug, covered only with sleeping bags. You would think it was a nightmare but in fact we were very comfortable
because the rug was very soft. It itched a little, though, because, after all, it was made of real,
natural wool.

The next day, early in the morning, we finally went to the mountains. The Zagros mountains are ideal for the Bakhtiari nomads. They are thickly covered in all sorts of plants and in 90% of the valleys there is a source of water so sheep and goats have a place to graze. After crossing two mountain passes we entered a valley where we noticed the first tents. As it turned out, they were nomads’ yurts, of the more civilized kind – the nomads had a radio, a power
generator, cell phones, and many things that make life easier nowadays. Anyway, we were quite excited with the thought that we were on the right track. Interestingly, the head of the family did not mind the small son’s playing with a rifle. The boy looked quite well with it and, being about 2, already understood that he looked much more dignified with the weapon. From the people we learned that if we went on through the valley and crossed two more passes we would reach the nomads who live in much more severe conditions.

We found out that those Bakhtiari camp in the valley each summer for 4 months and herd sheep and goats here. Then, for almost 2 months, they travel with their belongings to the south of the country where they spend the 4 winter months and after that they return to the Zagros mountains, which takes them about 2 months. It is a hard life, especially in contemporary times, when the nomads see that one can live in more comfortable conditions, and more and
more families give up the nomadic lifestyle to settle in villages or even in smaller towns. We all agreed that our trip to the Zagros mountains was spot on because likely in a few years there will only remain tales about the real Bakhtiari nomads.

Next morning we got up early, Habib and his friend virtually ready for the march, while we were dawdling sluggishly about. By the way, it was during that trekking that our tent was tested before the mountain ranges of Pakistan. The summer-conditions test was passed with flying colors. We set off in the direction shown by the nomads met the day before. We quickly reached the first camping place. We were lucky as there were no men in the camp at that moment, only women and children. All the men went to a wedding somewhere in the neighboring valley. You know how it is, men have fun, women mind the work… We could not have dreamed of a better set-up as the usual rules are that guests, especially strangers, are accosted by men only, and women should remain hidden.

This time, though, they did not have to get away from us, on the contrary, they were quite eager to talk with our Iranian friends. So, we had an opportunity to get to know what their everyday life looked life. We asked about plenty of ordinary things which were of interest to us. However, at that point language problems surfaced as the nomads from that settlements did not speak pure Persian but a dialect. Still, it was not that bad. Habib understood only a little but his friend Hassan could communicate more fluently as he knew a few dialects.

The Bakhtiari women demonstrated to us how they milk a goat, store the milk, wash the dishes, spin the wool, and, most interestingly, bake their bread, that is, flat round cakes. With practised hands, one of the women formed the cakes and baked the bread on a flat metal plate over the fire. We asked if we could film it but were refused. The Bakhtiari women are Muslim and they do not agree to making any kind of an image of them.

However, the woman allowed herself to be persuaded when we assured her we would only film her hands and were only interested in the action she performed. She agreed and you can view the result with your own eyes.

We were overjoyed to receive a gift of a few freshly baked cakes from our hosts. Mmmm delicious! In exchange we gave them a bag of sweets for the kids.

Having marched for another hour, behind the next mountain pass we encountered further „settlements”. In the yurts we only met women and the elderly. The tired, heavily wrinkled faces of the people gave evidence of the harshness of their lives. Again, we asked about various things, and then presented them with a few blister packs of painkillers. Nomads use them rarely, only in times of real need, and that is why those drugs are really effective for them. They were very happy with the gift.

The Bakhtiari live in very modest surroundings. The whole family live in one tent. Often, the tent is just one big sheet spread over slanting wooden poles. There is a fireplace and the floor is covered with old worn rugs. Rolled-up mattresses are kept near the walls of the tents during the day and unrolled for the night.

On our way back to the first encampment we met groups of children whose task it is to shepherd the sheep and the goats. It is a difficult task but the kids were doing great and it was apparent they had fun with it. Wearing colorful, threadbare, and unbelievably dirty clothes, with disheveled hair, cheeks scorched by the sun, and dried-up snot under their noses, they seemed happy nevertheless. One of the boys confided in us that he was waiting for the return
to the south of the country because then he goes to school which he likes very much…

After the thrilling day we returned near the place in which we had slept the night before. We decided to go back there as the place was really pretty: a small green valley intersected with a mountain stream. It was also easy to find wood for a small fire there and we cooked a nutritious lentil soup.

The smell of our exquisite soup, cooked by Habib, attracted the noses of the nomads who came to visit us. Suddenly, the nomads and our „guides” started a very animated discussion. It turned out that one of the men said that the „city people” were not tough guys which made Habib and Hasan break into loud protestations. „Fine, then, go jump into that stream” – one of the nomads dared Habib. In a moment, Habib was out of his T-shirt and in the freezing cold mountain stream. He must have lain in it for a minute! That won him admiration on the part of the Bakhtiari as they averred they would not have been as bold themselves.

The evening passed in a nice atmosphere, relieved by „artistic performances” in the form of doleful songs sung by a young nomad, and tales told by the older Bakhtiari.

Apart from meeting those amazing, cordial people, we had great fun camping in the mountains. First, we had to find a good camping place, then, gather the wood, and finally light the fire, prepare food, and wash in the cold stream. We loved it. I recalled good old scouting days…

Our stay among the Bakhtiari people, the Zagros mountain nomads, was short but fruitful and full of events. After a few days of trekking we came back to Isfahan, via the same combination route. In the evening we reviewed our photographic yield, tired but happy, in the fumes of a mixture of dried herbs. The smell was a bit reminiscent of that of our church incense. Habib explained to us that in Islam the smoke („espand + zaj”) creates the „holy atmosphere” but also has healing properties, and he felt a bit weak after the memorable bath… Such is the price to be paid for being a tough guy…