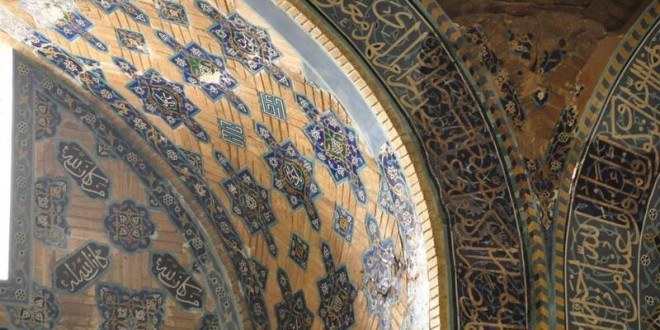 Our first encounter with Iranian hospitality

The first day in Iran passed very quickly. Perhaps it was because we readily absorbed everything we saw. It was all new to us – the language, the alphabet, the manner of living, the people, architecture, habits, and rules in the country, and especially… money.

The currency of Iran is Iranian rial. USD 1 is IRR 10,000, but – so that it is not too simple – the common currency is the non-existent toman or, more exactly, rial converted into tomans. Strange? Not so much… it is so logical and natural. If you ask how much a banana shake costs the answer is 600 but really you have to pay 6,000, i.e. USD 0,6.

Right, so what does it look in practice, on our first day in Iran? I want to buy beer – an unrealistic wish, but we will return to that ;). So I want to buy water – I hear 300 (that is, tomans), so I give 300 rials because my banknotes are in that currency but the seller looks at me with big eyes and repeats: „Three hundret!” So I make big eyes at him and give him that damn three hundred and he starts again: „Three hundret!” „Damn so how much do you say that damn water is?” I sing under my breath and show him my banknotes.

But what is all the fuss about? Supposedly, it is easier to convert everything to tomans, which de facto do not exist, and to pay with rials whose value is 1/10 of toman. Iranians explain that the procedure makes life easier because, as the nominal values are high, they cut one zero so as to use a currency which is easier to pronounce (it is faster to say 500 than 5,000) and whose value is 1/10 of the official Iranian currency. Naturally, that nuance irritated the heck out of us for about 3 to 4 days until we got used to it. Even so, I still believe that the trick does not make life easier, while it is great for fooling a white person who asks what the price of a taxi is and hears an amount which is ten times lower than the actual one. And the worst thing is – everything is OK! If you do not know local customs – the worse for you. Oh, how I love Asia!!! :)

But to return to Tabriz… we stayed here for two days – the first one was a typical sightseeing route. Mosques, interesting buildings, parks, etc. The greatest attraction, though, was Nasser who works in a tourist information office in Tabriz and is a fabulous speaker of Polish. As we found out he had had a strongly emotional episode connected with Poland but he ended up marrying an Iranian because he could not, for formal reasons, stay in Europe. In my opinion, Nasser is a must on the itinerary of every visitor to somewhat grayish Tabriz. I do recommend dropping by the tourist information office at the end of Ferdosi Street, and having a chat with Nasser. On the door of his office one can notice a good deal of stickers from Poland :) Nice!

Just next to the office there begins the bazaar in which, supposedly, there are above 5,000 kilograms of gold. As the local people add: „and not one policeman – that is how safe a country we are”. It would be hard to prove them wrong. Iran is indeed very safe and people there are amazingly friendly, helpful, and hospitable, which we experienced already during our first days in Iran.

Looking for women in chadors, camera in hand, in the park near the Blue Mosque, we were accosted by two girls. They tried to speak English to us but, as they were not doing very well, a few other girls came to help, and then a few others, and some more… in the end, after we had looked for some respite from the crowds on the streets, we were surrounded by 10 Iranian girls. Suddenly, another beauty appeared, introduced herself to us in fluent English, and sat beside me. We began a longer conversation which ended up in a cellphone shop where Fateme, for that was the name of the beauty, helped us buy an Irancell SIM card. We made an appointment with Fateme and another Iranian girl for the next afternoon for dinner. The girls were to come for us to our hotel.

In the evening, sitting in the hotel and drinking cooled beer (alcohol-free), we suddenly heard a knocking on the door. We saw the head of some Iranian and in a moment Michał came in – we had agreed to wait for him in Tabriz. The funny thing is that Michał found our hotel without having checked the e-mail we had sent him to inform him about our exact whereabouts. He just happened to pick the same hotel from the guide as we did. One of the cheapest! :) Happy that our traveling companion for Iran found us himself, we fell asleep to get enough rest to face the adventures of the following day.

Apart from the standard itinerary, i.e. sightseeing in Tabriz and looking for clothes for Alice which would meet the requirements of the Islamic Republic of Iran, we awaited the meeting with the girls. Off course, telephones rang like crazy, since plans changed at least five times, but finally we managed to meet. It turned out that the girls, accompanied by their siblings and an aunt, wanted to take us to the park we had just returned from. Never mind, let’s go! We had a small picnic there and Fateme (a future actress) presented her recitation andsinging skills. You can watch that and judge by yourselves. For me that was a great attraction, surely greater than the bazaar and the mosque taken together ;).

We reciprocated her kindness with Polish verse and songs and, having finished the tenth-in-a-row photo session, accepted uncle Rocalle’s invitation to an amusement park where we were simply dumbfounded. Iranians, and chiefly Iranian women who spend the days floating through the streets in chadors, come alive at dusk in amusement parks. They use whichever attractions they can, making all kinds of noises suitable for expressing delight and excitement, squeaking included. We were positively surprised!

I was the most impressed by aunt Roghayeh who, in her black chador, went down the slides with a childish smile, the chador fluttering behind her. Interestingly, amusement parks are very popular in Iran. Both in Tabris and in Ardabil, which we visited next, we saw hundreds of people who, after dusk (Allah cannot see then), had fun in the parks,especially women.

About midday the next day we signed out of the Tabriz hotel and went out onto the street, the four of us plus our Iranian friends who came to say goodbye. I tried to hail a taxi but they were all busy and in the end a car stopped with two young guys who asked if they could help. I answered that we were trying to find a taxi which would take us to the bus station and they opened the trunk, saying: „Get in!” They took us to the station and did not want any payment even though we urged them to accept it 3 times, in conformance with the Iranian custom. They took us to the bus to Ardabil and wanted to pay for our 4 tickets but that we decidedly opposed and we paid ourselves. And that was only the beginning of our experiences of the Iranian hospitality.

We got to Ardabil in an old Mercedes… a nice jalopy for short trips. Having arrived we contacted our host who gave instructions to our taxi driver and 15 minutes later we were, for the first time, with a real Iranian family. We were incredibly impressed! The most important issue is not to hold out one’s hand (if you are a man) to greet a Muslim woman because that is a horrible faux pas. One has to be really mindful of it.

The house was different in that there was no furniture, there were Persian carpets and one eats, sleeps, and sits on the floor. The atmosphere is special. The first time in such a house is quite memorable, especially if one is accommodated by so nice a family as Karim’s, however, he managed to shock us the next day but that will be described later.

In the evening Karim took us to the park and to the lake, and the weather was rather non-Iranian – it was quite cold and fleece jackets were useful, as Ardabil is situated in the mountains.

We quickly agreed with Karim that a water pipe was what we all liked best so we went to a special place where one could order them. Again, such an atmosphere: a water pipe, smoke filling the air, special seats and the great company of Karim and his friend Joseph! A lot of jokes, interesting conversations, serious and light. Karim explained to us many issues concerning Iran and its specificity, so we could understand him better even though the issue of religion was still incomprehensible to us. But we will return tothat. After a long and fruitful evening we returned home and were served supper by Karim’s mother. We filled ourselves to the limits with Iranian food, similar to Turkish here in Ardabil.

One interesting thing! The whole region of Azerbaijan in Iran speaks, for the most part, Turkish, especially at home, and great efforts are made to secede from Iran and to join Turkey. It seems unrealistic but is worth knowing.

Next day we went toward Tehran because we were a little short of time due to the upcoming weekend and the necessity of submitting a visa application form in the Chinese embassy, and in Iran Friday is Sunday – we had to leave Ardabil on Tuesday evening at the latest.

After breakfast Karim showed us how good he was at playing the santoor, an Iranian musical instrument. We could not stop admiring it for a long time. The film below shows Karim with his sister who joined him with a drum. You can listen to it yourselves:

We still had the whole afternoon, until 19:00 when we had to get on the bus to Tehran, so we went to the Sheikh Safi al-Din Khānegāh and Shrine Ensemble which amazed us. Crystals, gilding, small pieces of mirrors with which the walls are encrusted make one feel a bit lost and overpowered with the splendor. The shrine itself, though, has a bit different character than I had got used to. The sheikh’s body is not on display like the Lenin’s or Mao’s in Beijing ;), instead, there is a shrine, treated with great veneration by the Iranians.

In the evening we set off in the direction of Tehran where we finally learned what Iran was like, especially its crazy road traffic we participated in.